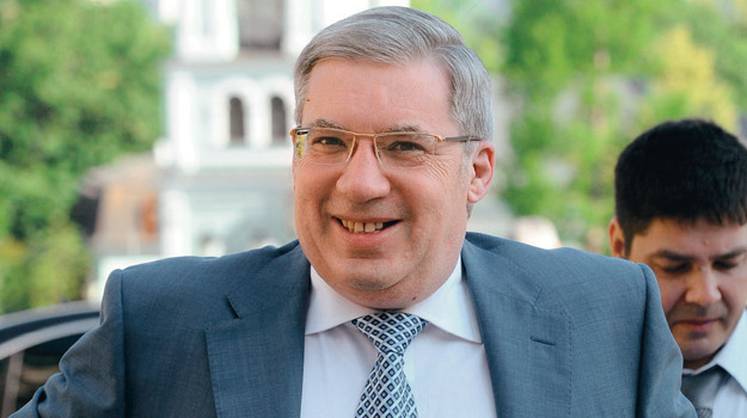 Photo by ITAR-TASS
Victor Tolokonskiy: “It is quite obvious that the Far East needs special development mechanisms from both the geopolitical and social perspectives; and, whatever might be said about it, it differs from the territories of Siberia”

Сreation of the Far East Development Ministry in the structure of the new Russian Federation Government seems to have nothing to do with Siberia. Even if the idea of setting up a public corporation for development of both the Far East and Siberia had been debated by experts and the media for quite a long time period prior to that. As a result, de jure, Siberia fell out of these administrative processes. However, Victor Tolokonskiy, special representative of the Russian Federation President in the Siberian Federal District, believes there is no tragedy about this. In his opinion, any economic development acceleration in the country’s east will have a positive impact on the Siberian District as well: it even needs no separate ministry or corporation for this purpose. However, local companies and regional heads should not sit back and do nothing expecting manna from heaven; they have to start preparing for the sharing of the investment pipe in the East today. In his interview given to the Chief Editor of the Expert-Siberia magazine, Mr. Tolokonskiy explained this as well as why the new phase in the development of the Far East and Siberia should not be considered colonial.

— Victor Aleksandrovich, the country has now the Far East Development Ministry, and Siberia has been deprived of such attention of the federal center again, although its accelerated development had been discussed many times. What should we expect now?

— In any respects, this organizational and structural decision is, in particular, positive for the development of both Russia and the large Siberia. Firstly, when such structural decisions are adopted, concrete administrative mechanisms, approaches permitting to efficiently manage separate territories and entire macro regions are promptly developed. Results that will be approved within the framework of powers and responsibilities of the Far East Development Ministry will be easily translated onto other regions. We have always proposed for the large Russia’s regional policy to be differentiated and have special approaches to the development of the relevant territories. This change has been made and this is positive.

Secondly, there ought to be no questions or doubts here. It is quite obvious that the Far East needs special development mechanisms from both the geopolitical and social perspectives; and, whatever might be said about it, it differs from the territories of Siberia. We are similar and we are different at the same time. Siberian regions are mainly sustainable and have powerful economic, resourceful, and human resource possibilities. Naturally, we also have areas requiring special development, for example, our republics. However, you will not deny that the population living there is not numerous and this is not the entire Siberia. And practically all the territory of the Far East needs special conditions. Siberia is populated by over 20 million people while slightly more than five people live in the Far East. These are huge territories adjacent to the borders, China, and development centers located in the South-East Asia. The Government’s logic is quite obvious and clear.

Thirdly, this innovation will undoubtedly affect part of Siberia as well. A state commission in charge of development of the Far East, Trans-Baikal, Buriatia, and Irkutsk Region will be set up at quite a high level. Those regions have been already brought together under the federal target program and they will undoubtedly be equal participants implementing various federal programs, applying special measures and modes of development.

Finally, the last argument: I am confident that any acceleration in development of eastern territories will be positive for the large Siberia because the Far East will be primarily focused on strengthening cooperation links with our macro region. Isolation is impossible: the Far East will need our industrial products and our resources, primarily our human resources. Any development program in the Far East will entail attraction and strengthening of human resources. The human capital will always constitute a determinant factor there. This means that research works will be demanded and our infrastructural companies will profit from it. Furthermore, you ought to know that today any large investment programs can be interregional only. For example, transport: at present, there is a problem of transporting products from our regions to the Far East ports. The Trans-Siberian Highway obviously needs to be expanded in the east and its reconstruction will unambiguously have a positive impact on Siberia.

If we talk about Sochi, for example, our companies cannot profit much from it: there are a lot of other industrial centers in the neighborhood. And Siberia will gain a lot from the Far East development. This is why I am sure that creation of the aforesaid ministry is a very important decision for the development of Siberia.

— You have mentioned cooperation. But let us go back to Vancor. The Krasnoyarsk Territory’s industry turned out not to be well prepared for emergence of such a project and this is what Governor Lev Kuznetsov complained about so many times. Will we not have a similar situation here when high expectations from the Far East investment boom will never result in specific achievements for Siberia?

— You are right to some extent. This problem does exist and it is an administrative one. The task consists in setting everything quickly and correctly. It is obvious that we will profit from advantages resulting from the Far East accelerated development. Of course, I am now talking more about plans, hopes, and opportunities. But I think that, once the relevant regulations have been adopted, we will be able to talk about the impact of all this on our territories. If the Far East project is successful, we will propose to expand it on our territories needing special development. I think we will meet under the auspices of the Russian Federation Government and will try to set more precise tasks to the heads of the regions of the Siberian Federal District and the Far Eastern Federal District. Obviously, we have to emphasize priorities to secure an integral and comprehensive effect as it is impossible to do everything at once. And we will have to re-orient many sectors toward the Far East: the scientific and educational complexes, infrastructural sectors. I will try to share these plans and moods with the heads of the Siberian regions soon. By next fall, I believe there will have been something more specific. And then we will be able to talk about decisions that we will adopt to accelerate and improve quality of development of the Siberian territories.

— The so long discussed idea of creating a public corporation for development of Siberia and the Far East has been exhausted, hasn’t it?

— As soon as the new ministry starts forming its own development programs, it will need development institutes. A public authority alone cannot solve many problems. Some opponents say today that we should use what has already been created, for example the VEB foundation. But hopefully development institutes of the Far East will be ambitious, large-scale, and revolutionary. I do not rule out that the ministry will need a company partially owned by the state that would be capable of implementing large investment projects in a market environment.

— I have not studied operation of this structure in detail. I think that objectives are broader and richer in the Far East. Obviously, the Government will be unable to do anything on its own, particularly in developing the infrastructure. Therefore, a private investor will be necessary. As a government body, how will the ministry attract it? We will get confused. And a public joint-stock company with the state capital will be able to find investors, create joint-ventures, and implement projects.

— What you are saying seems to be logic and right. But, apart from economic levers of such a public corporation, part of government powers up to special tools of subsurface use, land relations, and migration policies were proposed to be transferred. Is it not too much?

— One ministry will be enough for the special measures of government regulation. Of course, there may be no specific laws of the Far East, but there might be the Russian Federation laws specifically written for the purposes of the Far East development. For example, there is a law about special economic zones. The situation is the same here. Please understand: we are unable to efficiently develop the territory, if the Russian laws will be unified and similar. We should send a clear signal to investors. For example, it is necessary to reduce taxes or simplify the rules of land use.

I repeat that a public company or corporation, whatever you call it, should work with private investors, relieve them of high risks, and reduce the project payback periods. In certain cases, it should create the growth points, build facilities by using the government possibilities, and then transfer them to investors on its own. And it is not necessary to build by using public funds. A public company will be able to obtain credits, work with investment foundations, on stock exchanges and financial markets, and encourage arrival of the banking capital. It is extremely important for it not to create the state economy. If the core objective is to attract private capital, it is necessary not to make the development process a public one, but, on the contrary, try to make such investments so that it be followed by an individual owner.

And how do we normally proceed? Here is the taiga, space, a river, the sun; so please build the roads and lay the ETL. A public corporation is necessary to avoid this all. Russia will not do without such development instruments today. And we should not fear it. A market initiative is a family shop, a bakery, or a candle plant. And large companies created by the private and public capitals are necessary when it comes to investing trillions and resolve a complex task.

What risks are we exposed to? Here they say about single taxes or similar laws. Wait! Russia has the population of 142 million, and the Far East population reaches slightly more than five million people. The District’s share is decent in everything: starting from the GDP and ending by income payable to the federal budget. We have no method other than specifically encourage development here. For example, we should repay mineral extraction taxes to such companies by clearly stipulating what they should use for. The country will not experience a loss due to the small share of the Far Eastern regions, but regions will have a powerful resource to accelerate its development.

— What will you answer to those believing that the colonial approach to Russia’s East development continues in this way?

— I do not understand how these macro areas as well as many other territories can be developed without using their natural resource potential. Talks about colonialism start only in cases when resources are extracted. But what’s so bad about it? Of course, it is wrong to develop nothing while exhausting resources. This is how they did under the USSR; but even then there were district coefficients and resources were allocated to build the infrastructure. At present, we are talking about development. And it is the Government that should be in charge of development. Private capital does not need it: its objective consists in extracting and exporting. A watch is sufficient to deal with it. This is cheaper. This approach can be called a colonial one. But we do not accept it. We do not want to just develop new fields, but to develop territories so as to prevent exodus of people from here as well as creation of a desert. Therefore, this is a different approach. I do not know how to call it. This is probably colonialism as well when civilization comes where there is nothing. But this will be done.