Preparing and holding events of federal and global importance is a dream for every Russian region. This is a chance to solve many regional problems by profiting from funds of the federal budget and extra-budgetary investments. The Tatarstan government authorities used this method of solving problems in a professional manner 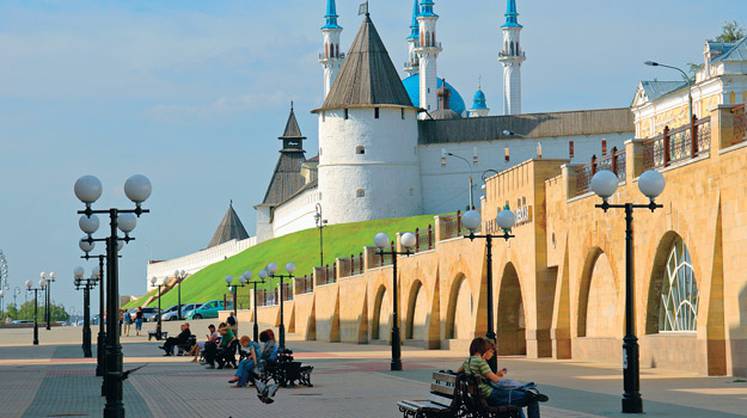 For the last ten to twelve years, federal and private investments have been particularly actively attracted by regions for any important purposes; on the one hand, the budget reform redistributed a considerable portion of revenues of the constituent territories for the benefit of the federal center; on the other hand, regions entered tough competition with each other for funds of private investors. The latter, in fact, except purely raw material-related projects, do not care about where exactly to open new plants and factories. The main requirements include availability of a well-developed infrastructure, including the transport one (if a region has a small uncared airport from which something flies to Moscow once a week, this airport has nothing to expect at all) and a favorable investment climate (fiscal discounts, quick solution to land-related issues, etc.). From this perspective, holding big events of federal and global importance is quite advantageous: it means improvement of reputation, direct government investments in infrastructure development, and considerable “pouring” of money by private investors.

It would be good to find an old coin …

The simplest way for “distinguishing itself” against the background of other regions (this does not apply to Moscow and Saint Petersburg as they are already “distinguished” by definition) is to prove you are older than others or just identify any “appropriate” date. In September 2010, for example, Yaroslavl celebrated its 1 000th anniversary. Over three years, the amount of RUB 24 billion was allocated from various level budgets (primarily the federal one) for preparing and holding this celebration.

In addition, however, Yaroslavl Region Governor Sergey Vakhrukov says that in 2009 alone this event attracted investments from businesses totaling over RUB 50 billion in the regional economy; Rusresorts and Vnesheconombank, for example, started to implement the historical entertainment theme park that is unique in Russia and worth more than RUB 10 billion designed for the simultaneous visit of three thousand tourists. The political status of Yaroslavl upgraded as well: the Government Commission for preparation for celebration of this anniversary was headed by Russian President Dmitriy Medvedev in person, and Yaroslavl has regularly hosted international political forums since then.

The 1 000th anniversary of the Mordovan people’s union with Russian peoples will be celebrated this year; this event will be funded by budgets of all levels allocating RUB 28.7 billion, including RUB 18.7 from the federal budget, RUB 6.2 billion from the republican budget, and 3.8 billion from extra-budgetary sources. “I believe that it is good that, while preparing for this anniversary, we are following the existing tradition and pay special attention to the regional development, improvement of its social infrastructure, i.e. concentrate resources on problems of the highest importance for people”, - this is how Prime Minister Vladimir Putin presented the attitude of the federal center. Therefore, RUB 5.4 billion more was promised by Moscow to Saransk for the purposes of improving the housing conditions of veterans, developing courtyards, modernizing the housing services and utilities, and settling residents of failing buildings.

Regional leaders are naturally inspired by all of these measures. The Ulan-Ude authorities prepare to “add” two more thousand years to the official age of the city that is actually 345 years old thanks to the Hun Ancient Settlement archeological monument located 15 km away from the capital of Buryatia. Bashkir archeologists have almost persuaded their President Rustem Khamitov that Ufa is 1,500, and not 451 years old. And Samara Region Governor Vladimir Artiakov, just as his predecessor Konstantin Titov, seeks evidence that Samara is, in fact, 650 instead of 425 years old. Such evidence seems likely to be found. And it is not about existence of historical documents or funds that are now generously allocated for Samara studies. It is important who is involved in such search. Last summer, the State Archeological Service of Samara Region signed an agreement for research works dedicated to “Identification and scientific analysis of manuscripts and cartographic sources of the 14th – 15th centuries containing the first mention of Samara as a settlement” with Sh. Marjani History Institute from Tatarstan. Kazan historians and archeologists have relevant experience: in the late 1990s, they performed diggings of the Kazan citadel thanks to which Tatarstan received a rain of investments for celebration of the 1 000th anniversary of Kazan.

A bridge between the past and the future

Historians and archeologists still dispute over genuineness of the 10th century Czech denarius and circumstances under which it was found during diggings on the territory of the Kazan citadel in 1997; however, this is a fact that first Russian President Boris Yeltsin signed an order to celebrate the 1 000th anniversary of Kazan foundation in 2005 and first Tatarstan President Mintimer Shaymiev brilliantly profited from this opportunity. Official data disclose that the total amount of funds invested then in construction and reconstruction of Kazan buildings as part of preparation for the 1 000th anniversary celebration totaled approximately RUB 86 billion: RUB 12 billion was given by the Russian Federation budget, RUB 38.6 billion was allocated by the regional budget, and RUB 35.7 billion was attracted by the Tatar authorities from investors.

According to alternative information, direct investments from the federal budget for celebration of the millennium anniversary of the Tatar capital totaled RUB 65 billion in general, and the total amount of funds raised for these purposes surpassed RUB 140 billion. These funds were used to build 200 large buildings and facilities in Kazan, including the subway, restoration of the historical center of the city and the Kazan citadel; over thirty thousand Kazan families were evacuated from failing buildings to be pulled down in the area of new housing development and settled in new flats. And this result in terms of the amount of investments attracted to fund this event has not been surpassed by other regions so far and is unlikely to be surpassed in the future.

It should be also noted that the media greedy for revelations mentioned no case of embezzlement of funds allocated for celebration of the 1 000th anniversary of Kazan, and the speed at which works were performed was impressive. When on August 27, 2005, Mintimer Shaymiev organized a tour for his two dear guests: Russian President Vladimir Putin and Kazakh President Nursultan Nazarbayev by new Kazan subway built from the “millennium celebration” funds, he was proud to announce that five stations of Kazan subway were built from scratch in eight years. And the subway was the first one in Russia that was built after the collapse of the USSR. The previous subway opening took place in Sverdlovsk in 1991.

After the millennium celebration, Kazan subway development slowed: only one station “Victory Avenue” has been put into operation for the last three years. Implementation of other infrastructure projects that were actively developed in the period of preparation for celebration slowed as well. “On occasion of Kazan millennium anniversary, huge construction projects, namely the subway and the Russian largest Blue Mosque, were developed in 2005; however, the positive aspect of this event did not last for a long time”, said Andrey Vernikov, Deputy General Director for Investment Analysis of Zerich Capital Management IC, to Expert.

And then Kazan decided to profit from its experience again and, in summer 2008, supported by Moscow, it won the right to host the Summer World Student Games: Universiade. Since then, Tatarstan and its capital have enjoyed a rain of investments again. The total funds allocated for this event cannot be counted. The amount of direct investments is estimated at more than RUB 100 billion. According to Kazan Mayor Ilsur Metshin, the federal budget allocated RUB 10.5 billion and the republican budget gave RUB 1 billion for the subway construction last year alone. For this reason, Kazan hopes that its subway length will increase by 17 km and the number of its stations will reach ten next spring thanks to the Games-related funds. The seventh station “Kozya Sloboda” was technically put into operation on December 27, 2010; three more stations: “Dekabristov”, “Moskovskaya”, and “Zavodskaya” are scheduled to be opened in May 2013.

The impact of the Universiade on the sports life in Tatarstan is quite interesting. The Rubin republican football club, an honest outsider, moved up from the tenth to the first line of the tournament table of the Russian football premier league in the 2008 season and managed to maintain its leadership there for two years. However, in the 2010 season, Saint Petersburg Zenit and Moscow TsSKA pushed it down to the third position; in the 2011/2012 season, Rubin went down to the sixth position.

“From the economic perspective, we can see that the industrial production growth in the Republic of Tatarstan was equal to 6.2% in Juanuary and February, while in Russia on the whole, this indicator rose by 4.9% with a similar structure and with no incentives such as preparation for the Universiade. In other words, funds allocated to the Universiade work and are used as statistical data show”, - says Aleksandr Osin, Senior Economist at Finam Management MC.

Tatarstan would not be Tatarstan, if it did not build a “bridge” beyond the summer 2013 (the Kazan 1 000th anniversary celebration lessons were obviously learned in the Republic). Kazan received the right to host the Water Sports Championship to be held in 2015. In 2018, it will be one of places in Russia where the Football Championship will be held. Tatarstan will obviously insist so as to host at least the quarterfinal matches of the Mundial in Kazan (the 2018 Football World Cup final will be held in Moscow on the Luzhniki stadium, and the semifinal matches will be obviously hosted by Saint Petersburg). And naturally, both those and other local sports events will attract additional federal and private investments to Kazan.

In the period between the sports seasons, Kazan hopes to profit from the rising tourist flows both from the educational and entertainment tourism. At present, the Alabuga special industrial zone (SIZ), where investors receive good tax and customs benefits on behalf of the federal government, holds one of the leading positions in Russia in terms of popularity of Russian SIZ with foreign investors. The amount of investments to create new industrial plants and factories there may reach USD 10 billion. In addition, Kazan actively positions itself as the Russian center of business according to the Islamic rules, which is associated with an increase in the number of visits to the capital of Tatarstan.